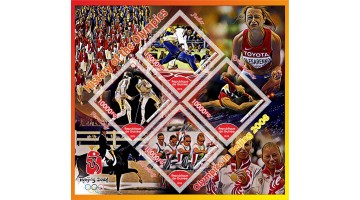 The XXIII winter Olympics were held from 9 to 25 February 2018 in the South Korean in Pyeongchang. These were the first winter Olympics to be held in South Korea and the third on the Asian continent following the Sapporo (1972) and Nagano (1998) Olympic Games. Pyeongchang had lost twice before. First to Canada's Vancouver in the fight of the 2010 winter Olympics and then to Russia's Sochi. Pyeongchang is the smallest city which receiving the Olympics Games. 92 countries were provided at the Pyeongchang Olympic Games. 6 countries were first involved in the winter Olympics: the Republic of Kosovo, Malaysia, Nigeria, Singapore, Ecuador and Eritrea. After the break, the teams of Bolivia, Ghana, Kenya, Colombia, North Korea, Madagascar, Puerto Rico and South Africa played again. On December 5, 2017, the IOC debarred the Russian Olympic Committee involvement in the 2018 Olympic Games. At the same time, Russian athletes took part in competitions on an individual basis under a neutral (Olympic) flag. 259 sets of medals were made, expressing the traditions and culture of South Korea. The projects author’s  is the famous South Korean designer Lee Suk-Woo, who included in the design Hangel (Korean alphabet and the basis of Korean culture), in their design through a series of consonants, symbolizing the desires of athletes from around the world who will come together as one to compete with each other at the Olympic games. The mascots of the 2018 winter Olympics are Sohorang (white tiger) and Barnaby (black bear).