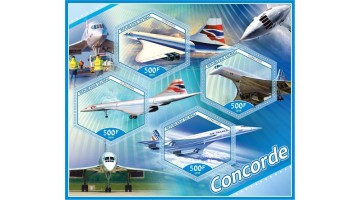 Concorde is British-French passenger supersonic aircraft, refers to the category of supersonic aircraft operated for commercial purposes. The beginning "Concorde`s" history dates back to 1962, when there was a merger of two programs of designing passenger supersonic aircraft. The French side was represented by Sud Aviation, the English side was by BAC. Reactive engines aircraft`s the power plant were created teamwork by the French firm SNECMA and British Rolls-Royce. For all history were produced 20 models, 9 from them were sold to air France and British Airways, another 5 aircraft were transferred to these airlines at a symbolic price. The first prototype of the "Concorde" was raised to the air in 1969, and since 1976, it has already been used in passenger transportation. On the account of air France and British Airways were listed on 7 aircraft. One plane was costed 23 million pounds (119 million in conversion of modern prices). A ticket on Concorde was costed in 30 times more than a regular flight, but seats sold out, and the supersonic flight program is expected to be a very profitable finally. Their exploitation amounted to a long 27 years, in which more than 3 million passengers were transported by regular and Charter flights. In 25.07.2000 was crash the aircraft «Concorde» happen at the departure from airport "Charles de Gaulle" (Paris). In the result, the crash the aircraft «Concorde»   killed 113 people. The air`s transport market travel was substantially reduced of supersonic passenger Airliners after September 11, 2001. These two events were the reasons why the Concorde was fully write off in 2013.

In the online store Stamps-world.eu you will find a big amount Stamps Aviation Concorde and Aviation Concorde on postage stamps of the world. They are such unusual, super-fast fighters aviation will perfectly add to your collection and will bring you to the fantastic world of aviation.